As for hosting is concerned, the game server can be 16 players max. as far as I’ve noticed, we never really got more than that. You could have more if your server can handle it, but if it costs you more to maintain a bigger server, you dont have to.

Things to be kept.

Alternatively, #2’s teleport to Biome Areas could have Traders there. The only problem with haven is we had too many players building their bases near the Trader there.
5. Retain the bot shop. Its awesome since old servers usually lack cars and stuff for newbies to harvest engines and the likes on. They dont have the stamina a character at level 100+ will have to be able to run across the map in a decent amount of time.

Things we should remove or discourage.

About map size, you could make it smaller, I like it since it’d make us lag less, but if it does become smaller, resources would need to restock faster since the map might be scavanged far faster than it is right now.

I like your suggestions. Unless I hear a counter proposal I would try and keep it as close to what you want, “balanced and fair”. Just 2 points I’d like to clarify.

Haven - Was initially a simple prefab. But we can’t control what people will do with it. It can be whatever players do with it. Usually its just a dumping ground. When we started the map, everyone was dumping clothes and wood, because its all we had. Now everyone is super rich so they dump their cement blocks. Go figure.
Same for building in resource areas, we can’t control But as a gameplay attraction I can enable PvP in those areas once occupied, which will allow a raiding party to go and capture or reclaim the land back to the wild. As they see fit. If we didnt have Haven it would be overrun and the campers would all die anyway during day 7

Bot stuff - All bot stuff will remain. I can only say that because i know the bot author smegz0r will definitely upgrade it to support a17. It takes time though as at least 2 other mods need to be updated for him to do his stuff.

thanks for being a very positive contributing member @capetsino

I guessed it was a prefab, yeah. Well if you need me to help setting up a new haven, I can. But it will definitely be nothing fancy. It wont be remotely close to the things I usually build since I’d make it specifically for newbies, no botomless pit traps that encourage veterans to use and abuse it to farm kills.

PvP in those areas is an interesting concept, but it might lead to griefers being around, hunting down newbies. It could work but handling will need to be delicate. If its a PvE server, it should be by far and large, PvE. Allowing PvP in resource gathering areas is risky business, I can already see people crying foul.

You could however, create an ‘arena’ sort of place where PvE is disabled. My thoughts are, find a town and surround it wil walls 4 blocks thick and 4 blocks wide. It will likely be a difficult task, but I am willing to volounteer to do it if you can provide me creative tools for like, 24 hours, then I can put in 4 entry points in the North, South, East and West with a banner/sign that indicate that it’s PVP enabled there on signage.

No need for thanks Vang, you do a lot of the work setting this up. Server management, bot management. I can’t donate in cash because I don’t want to get into overspending, but I can contribute through effort. Blocking my own atm’s from online spending was my solution to my self control issues.

(Co-ordinates, X,Y) (Blocks being the steps etc)
0,0 probably will be the biggest town in the game world as its in the middle.

with these 4 coordinates to TELEPORT to for players and from there on, we explore in all directions.

The perks of walking into unexplored territory equates to food and lifestock for us to survive in. And allowing players to spread out in various directions.

Currently, road & haven & minepath are in near vicinity of each other leading to overcrowding in the area and probably inability for new players to stay in safe area as well as scavenge for stuff to survive.

Following the above mentioned proposal, we would then have
(1) 0,0[Blue BOX] with N S E W , 4 zones(RED BOX) to explore to
(2) 3 diff axis for NSEW to explore as well. (8 diff directions, YELLOW boxes)

Which in turn equates to players able to decide which biodome/NPC to stay near to + which direction to expand out to. 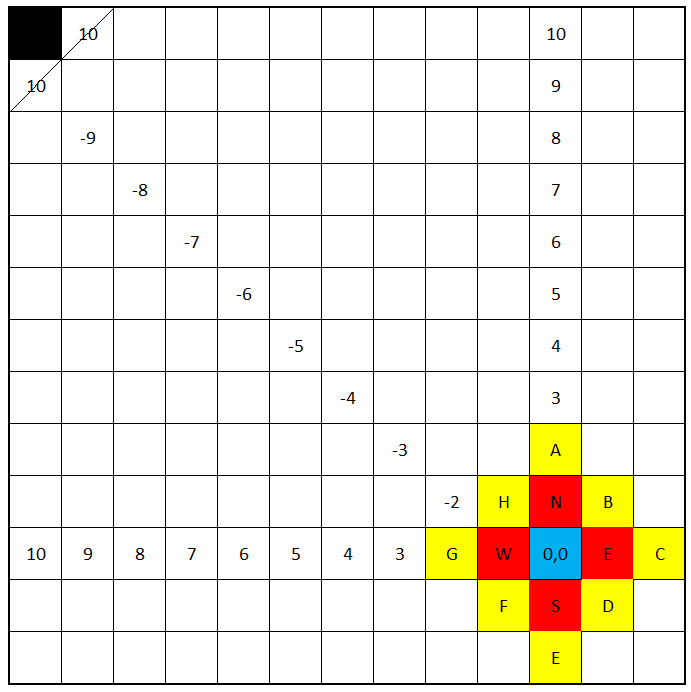 Your proposal to put a haven point at a map’s corner is actually good. I’d support this idea.

That corner haven prefab is totally doable I think we can pin this.
I will not be making a waypoint to the dealer, that was an early game mistake. It makes the game too easy and exploity.

I might add a public waypoint that takes you to the center of the map so its easy for people to go and spread out. that waypoint will be protected with reset so no one can build.

Most waypoints that you can access now weren’t meant to be public. It was just when 2-3 of us were playing we could not find each other on the hugeass map and we had a haven to build. After we were done it was just forgotten. I didn’t remove the waypoints.

I suggest we make the new server a bit harder, it’s way too easy and its a walk in the park.

Additionally, I will do a forum vote for a few game moderators. Interested folks can raise their hands. I will guide you along ofcourse but most of the stuff will be left to the moderator. We should have atleast 2 moderators who are online at different times.

Probably ability to remote reset the server will be best…quite often facing the “Starting Game” glitch where the screen just hangs there.

The stuck screen can happen if there is no issue with the server. Allowing
in remote control of server is never going to happen. What can happen is to
make a server monitor that will notify me that it’s down and I’ll get to
fixing it. When I travel I can enable remote access for myself but windows
is very limited. If it were Linux it would be super easy for me.